In my paranormal short story, Curse of the Ottawa, there is only one female and she is there only briefly, but she is the central character.

It is difficult to be genre specific with the story. It is certainly a horror story although it takes 200 years to complete. And usually horror stories are more compressed. It is science fiction since it involves a curse and practically no one believes in curses any more.

It is a fantasy for much the same reason.

I’ve settled for paranormal because that at least gives it a shot at some people giving it some credibility.

Female characters in fiction, especially horror fiction, and its sub-genres are considered unworldly and unnatural, women supposedly being gentler than men and largely incapable of the evil or dastardly actions of men.

Many women would laugh at this. Certainly, if you are familiar with black and white movies from the forties– which had great evil, wicked, or mean-spirited women as central characters– you would disagree. People now acknowledge the evil men do can be done by women too.

This character comes from a native North-American tradition where women were treated better in society than women in western societies then (maybe even now).

Historically, women who behaved badly—according to the mores of the times in which they appeared– were mostly considered unusual at best and deviant beyond common imagination at worst. They were considered remarkable in the sense that they were so few, and one spoke of them with wonder.

The character in Curse is a sixteen-year-old Algonquin tribeswoman who, seeing the murder of a member of her community by a European male, over a fraudulent land transaction, is called upon by the chief. She comes out of the crowd, strides to the man and says, “You have killed a man unnecessarily. You think you own the river but the river owns you. I curse you. One member of your family will die in this river for ten generations.”

She then proceeds to carry out the curse which ends only with the death of the tenth person– in the modern day—ten generations later. 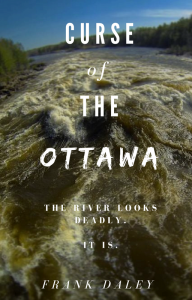 Curse of the Ottawa

Women in the native communities, when seen to be ‘different,’ were considered prophets and were listened to and relied upon.

This character, it seemed to me, was representative of native people who have been scorned in North America for centuries. Their healing knowledge and power, their spirituality, their very being, was dismissed. Here is a young woman who cares for her people and demonstrates extraordinary and perhaps unbelievable (?) power to reach generations into the future.

The sins of the father are replied to by her power.

Evil? Not in my book.

Women are getting a better deal in stories now whether in books, on TV, or in movies. They are being respected more and their qualities and their power, for good or evil, are the equal of males. As they should be.

Especially with the recent horrors of male abuse of women, it is a good time for women in life and in fiction. We hope.

A paranormal, historical, urban legend. Or…?

A man drowned an Algonquin Indian 200 years ago.

His curse? Family members will die in the river for 10 generations.

He didn’t believe it.

He and ten others died.