A lament for my lost writing partner 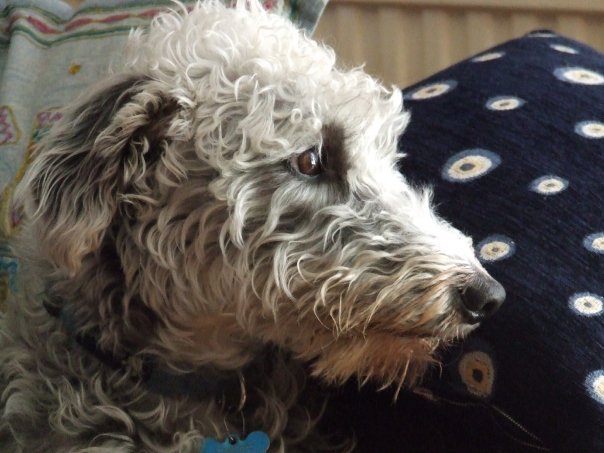 The landscape of my life has changed. As I write this, my beloved BFFF (best furry friend forever) has been gone for 8 impossibly long days and nights. It’s not the first time I’ve lost a dog, and it won’t be the last, but this loving and gentle soul, this communicative, intelligent boy … he was a kindred spirit.

Herbie Longfellow, a Bedlington Terrier x Collie Lurcher, was just 8 weeks past his ninth birthday when I decided to have his teeth sorted out. He had a general anaesthetic, and that night he developed a cough. I took him back to the vets and we started treatment that didn’t work. Gradually after a battery of tests we found a deterioration in kidney function, a heart murmur, and then a few weeks ago, the Big C, a massive tumour in his chest blocking his airway and squashing his lungs – that turned out to be the thing that had been causing the rotten cough all along.

The vet admitted later that she considered letting him go as soon as she saw the mass on the scan but she said she always treats the animal, not the disease. That was her gift to us. She said we would need to let him go within 48 hours, but while he was under she decided she would do a chest drain. That actually gave us another three wonderful weeks to love him as much as we could.

Herbie was obviously ecstatic to be home. I became his personal nurse. I changed his food, I altered his exercise pattern, and I spent every available moment with him. I second guessed his needs. What Herbie wanted, Herbie got. For a time I could ‘forget’ (ha! I didn’t!) but the deterioration was persistent. I couldn’t let him suffer. Three weeks after that initial chest drain, my husband and I did a series of ‘lasts’: last dinner, last sleep, last cuddles, last walk, last drive to see our vet.

Instead she offered another chest drain, and again my soul soared to have him with me, but we were marking time. By the end of the week he was off his food, didn’t want to walk and couldn’t get comfortable. It was time. No going back.

My vet, and the two nurses that work with her, are phenomenal, and because of the issue with squashing his windpipe and frightening him, we elected to have him standing, supporting him as the injection went in. I spoke softly to him all the time. He sank into our arms and slipped out of this world, in peace, surrounded by love. I can still feel the weight of him in my arms, and sometimes that’s a comfort, and sometimes it’s a horror, a reminder that he died, and I OK’d that.

Dealing with grief, especially when it’s a pet, is difficult. That’s an understatement, isn’t it? Animals aren’t people. You don’t say you’re bereaved. In fact the limitations of the English language when it comes to pet death are quite stark. You can’t even say you’ve lost someone, you have to say you’ve lost ‘something’. Herbie was not a thing. He wasn’t a possession. He was a vibrant being, with feelings and intellect and humour and a great capacity to learn and love.

Fortunately for me, on the whole my friends ‘get it’. My family certainly do. I’ve been given plenty of space to grieve and to talk about him, and no-one seems to mind that I randomly start to weep. When I’m with my husband I can sob. When I’m alone I can howl.

I had spent the few days before Herbie’s last day writing a short story and concocting a few tweets for #PitchCB on Friday 29th July (pitching contest to attract an invitation to query two of the best UK agencies with my novel). When I arrived home alone from the vets I didn’t really know what to do with myself. I had the worst headache imaginable and I felt like I’d been anaesthetized. I sent my #PitchCB tweet and checking back a few hours later I had a like! Normally I would have run round the block a few times whooping and hollering, but that day, I sat at my laptop and let the tears roll.

My output this week – for clients and for myself – has been negligible. My creativity is down the Swanee, quite frankly, and my ability to write coherently, has largely struggled. This is problematic given I’m freelance and I have a massive vet bill, some of which will be recovered through insurance, but some of which will not. I have a deadline for a short story next week, and I think I’m going to miss it. It’s not great.

I found a Wiccan ritual for a lost pet, and my husband and I performed that on the night after Herbie passed. It was helpful because we could vocalise how much he meant to us, and therefore mark his life, but also for me, it gave me a chance to tell him why I made the decision that he must go in spite of the fact that I loved him and he loved me.

Having the power over another creature’s life does not sit easily with me. I don’t have a God complex. Who am I to choose who lives and who dies? I don’t like the idea of capital punishment, I don’t believe in an eye for an eye. I am much more a live and let live kind of gal. But finding that moment when the suffering of one you love is too great, and being able to gently take that pain away, that kind of feels right. It kind of feels ok.

That’s not to say I don’t have guilt, and worry that I let him down.

It comes in waves, that grief. I let it take me. Small things set me off: a line in a song, the sight of his collar, my husband calling one of our other dogs by his name. This morning I took the Bonio box out of the cupboard and was catapulted back to when Herbie had noisily demanded his treats.

And that’s the thing …. He was my writing companion. He’d learned that if he came to my left hand while I was writing, I would still stroke his head while typing with my right hand. He lay as close to me as he could, often right on or beside my feet under the desk. He would make his presence known at 11 and at 3.30 ish – break time! He woke us in the morning (hated that the alarm doesn’t go off at 6 on a Sunday, he made sure that we never slept past that time so it might as well have been), he sorted us out for walkies and breakfast. In the evening he would sit in front of the TV if he wanted treats or dinner. He could tell us he wanted water by slightly tipping our glasses. He would yip at 10, cue evening wees and time for bed. He’d try and stay on the bed and be shooed off into his basket. Then he’d wait until we were asleep and stealthily creep back up. He was there when I awoke and would give me a knowing look.

We had such a strong connection, Herbs and I. He loved others, of course he did, but he and I were the best of pals, soul friends.

I miss all that. I want him here. I yearn for him. My left hand tingles when I think of him. He was a wonderful, warm, funny, intelligent, loving, bouncy, happy boy – my shadow and writing companion – and he stole my heart.