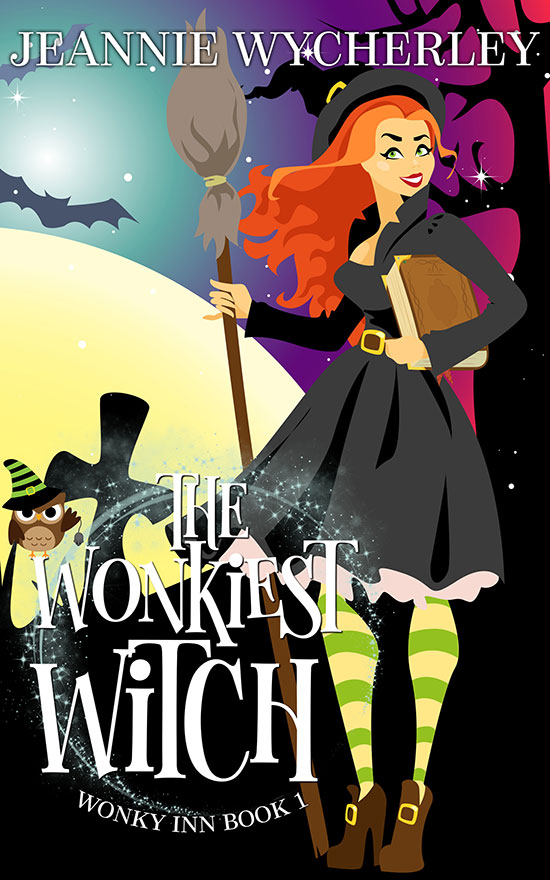 Alfhild Daemonne has long denied her magickal inheritance, but now that she has unexpectedly inherited an inn—complete with a dead wizard on the patio—it may be time to confront her past and forge a new future. 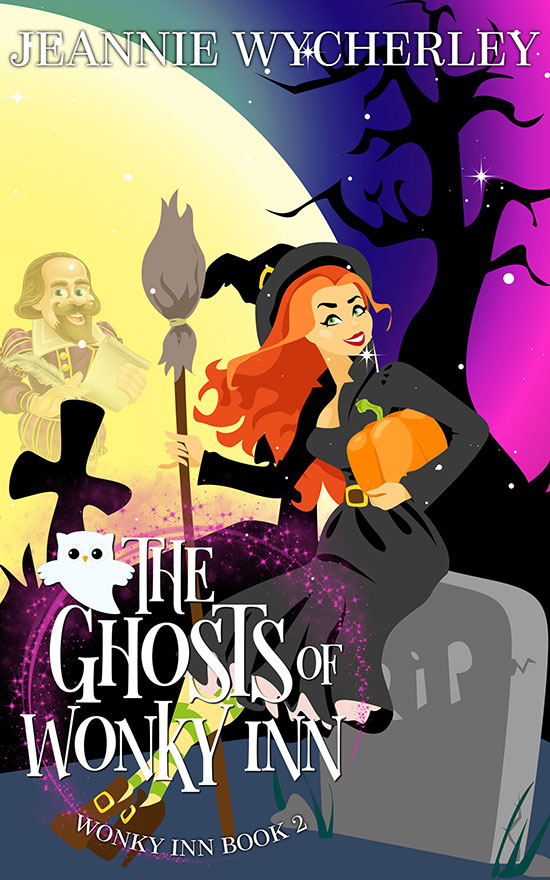 Alfhild has tried to banish her demons. And her ghosts. But night after night she’s awoken by a sobbing spirit who claims he’s lost. And worse than that, someone is trying to kill him. But how do you kill someone … who is already dead?

Whittlecombe: a charming village in the south west of England all thatched cottages and picture postcard perfection. But people are dropping like flies. It could be the flu. Or it could be that Alfhild Daemonne, is about to host the vampire wedding of the century at Whittle Inn. 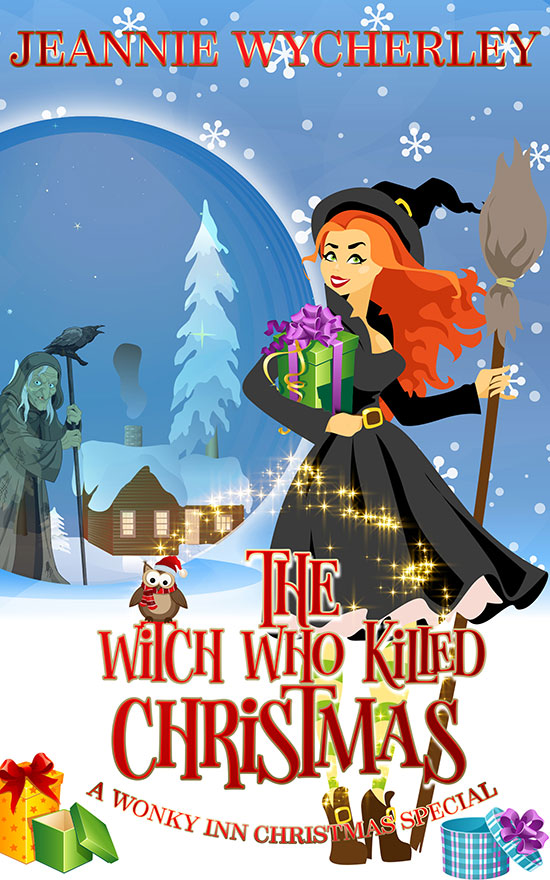 The Witch Who Killed Christmas: A Wonky Inn Christmas Special

An unexpected snowmageddon threatens to derail Christmas at Alfhild’s inn. She’s hosting her first festive celebration, so she’s understandably disappointed when guests begin cancelling bookings, thanks to the abnormal wintery conditions in the south west of England. When Alf receives information that there may be an ulterior reason for the weather anomaly, she journeys deep into the forest in search of a witch with an attitude problem. 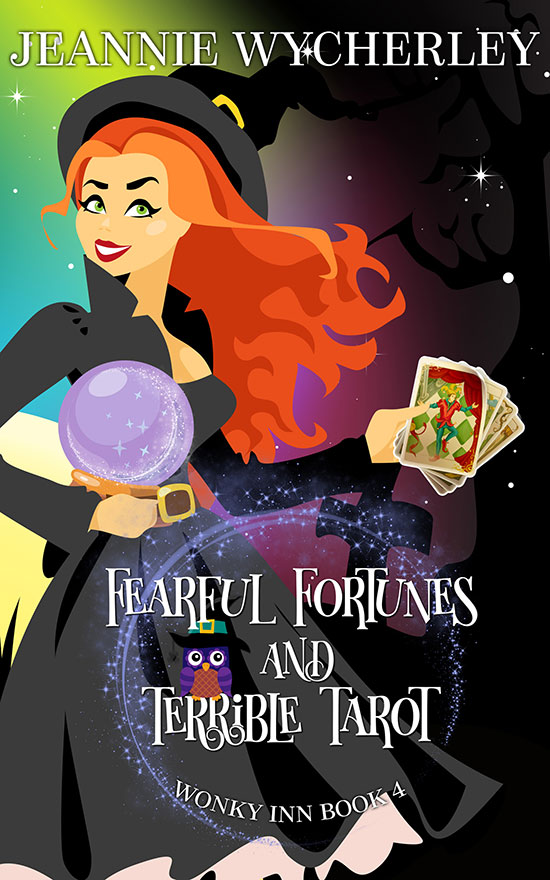 There’s a psychic fayre heading to Whittlecombe. Alf, the witch, didn’t see it coming … perhaps she should have done. Banned from attending the Fayre, she looks set to miss out, until Wizard Shadowmender sends her on an undercover operation. Sark forces are gathering in Whittlecombe. Can Alf make it to her 31st birthday? 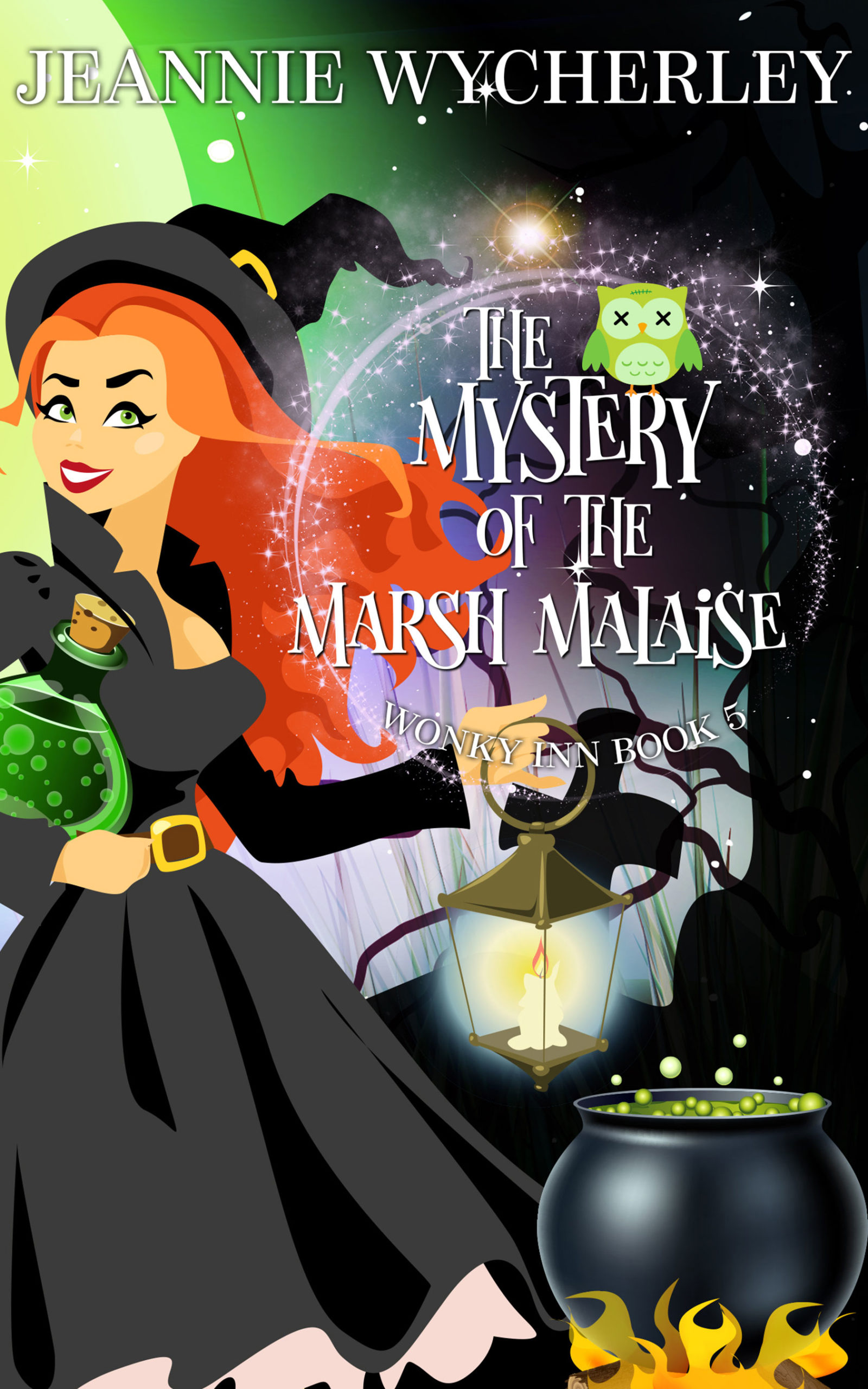 The Mystery of the Marsh Malaise: Wonky Inn Book 5

Alfhild’s beloved Speckled Wood is dying and several Whittlecombe villagers are seriously ill. The problem appears to lie with the water. Meanwhile her bitter arch-rivals, The Mori, are out to do serious harm to her business. It’s time for ‘nice’ Alf, to become ‘nasty’ Alf. Can Alf become a lean, mean, witchy-fighting machine? Only if she stops eating cake. 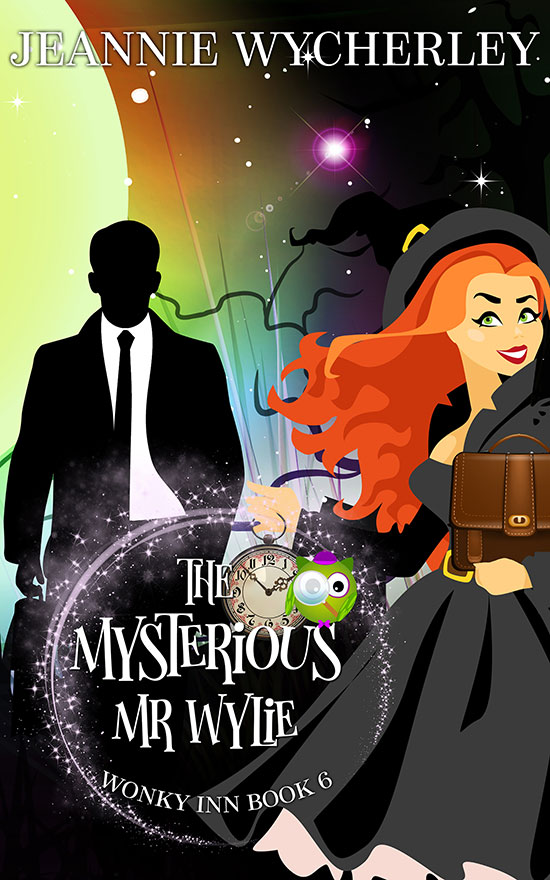 Building work at Whittle Inn has unearthed a skeleton. What was the victim’s link to Alf’s wonky inn and why were they interred within the walls? As she investigates, it soon becomes obvious that Alf isn’t the only person who’s interested in the discovery. The mysterious Mr Wylie is paying a return visit to Whittlecombe, and it quickly transpires that nothing is as it initially appears. 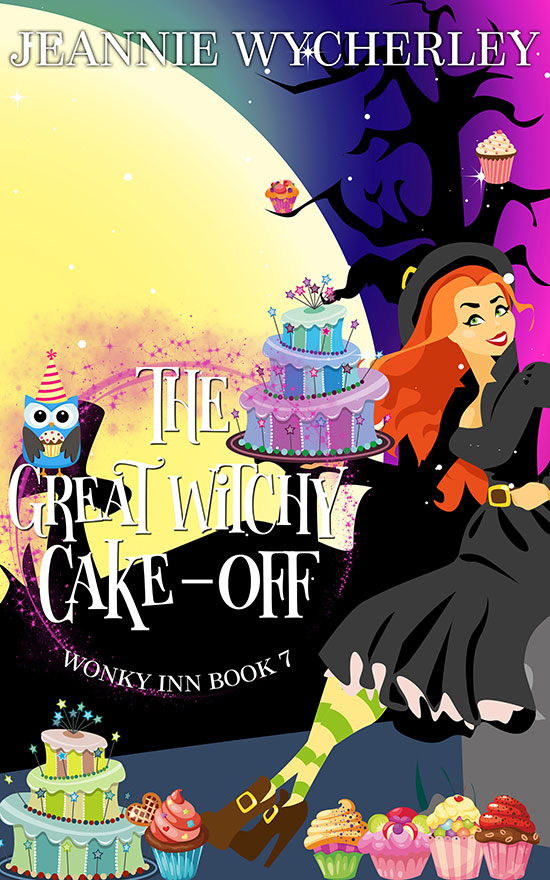 The producers of Witchflix TV favourite The Great Witchy Cake Off are searching for somewhere new to film their next series. But what seemed like a great opportunity for a little harmless Wonky Inn self-promotion backfires when, at dawn on the first day of filming, one of the contestants is found toes-up outside the famous marquee. Who knew the baking world could be so deadly? But never mind, solving this mystery should be a piece of cake. 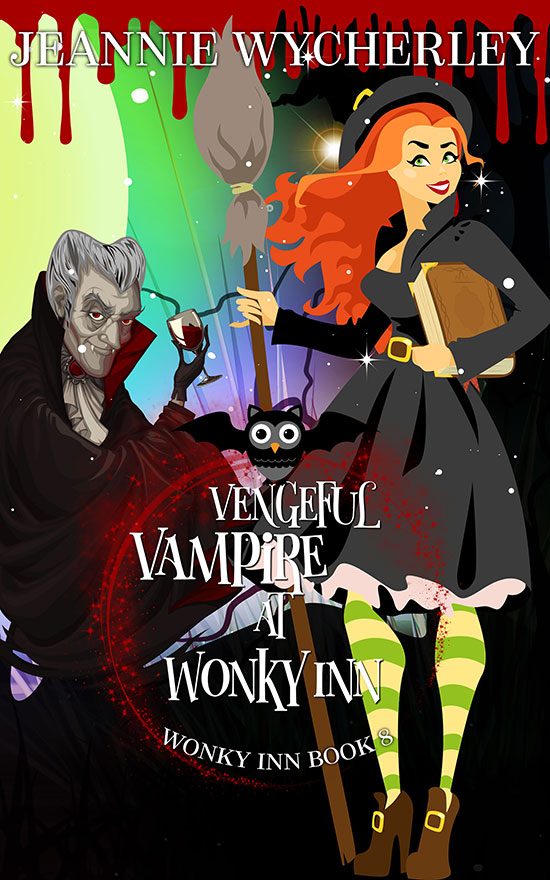 After hosting a diabolical vampire wedding last Halloween, Alf had imagined that Whittle Inn had seen the last of those long-toothed monsters. But since then, one thing has continued to bother our favourite wonkiest witch. Who killed the handsome young vampire Thaddeus? And why? Will the evil Count Grigor and his coven of fiends finally have their revenge?

It’s the most wonderful time of the year. Unless you’re Alfhild Daemonne that is. She’s been looking forward to the festivities, but wouldn’t you know it, the walls of wonky inn are ringing to the sound, not of sleigh bells, but of sick ghosts. Who knew ghosts could catch the flu? And let’s not forget there’s been a murder in Whittle Forest … Factor in a homeless reindeer and a grumpy faery who detests Christmas and there’s plenty here for lovers of Christmas murder novels with added humour. 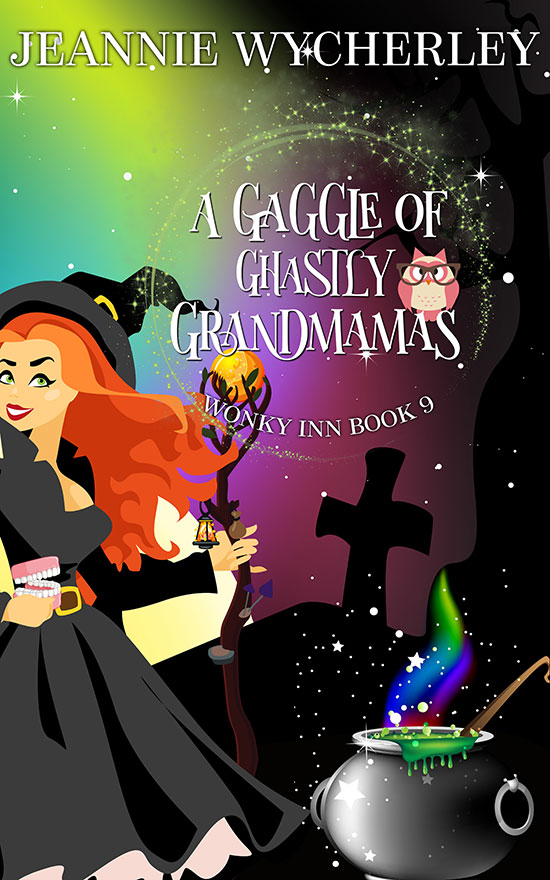 In need of a little quick cash, Alfhild Daemonne has reluctantly agreed to host a convention for her deceased grandmother’s old sorority society. But only on the explicit condition everyone behaves. The sudden appearance of an elevator with a mind of its own and a dead witch means our poor old Alf has a lot on her hands. 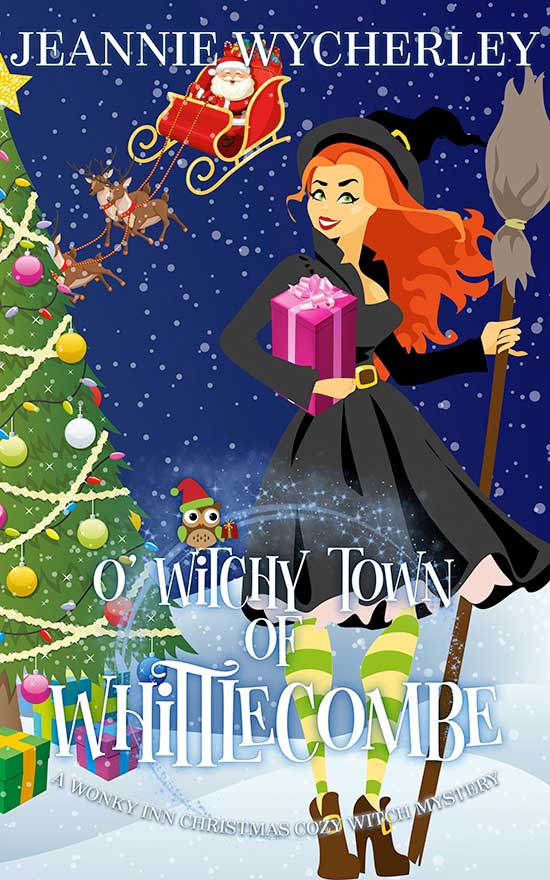 ​Some of North America’s top film stars have descended on Whittlecombe. Is the tiny village ready for such an intrusion? Apparently not.

Magic and mayhem, a murder and the BIGGEST movie star on the planet? It’s the usual chaos at our beloved wonky inn! 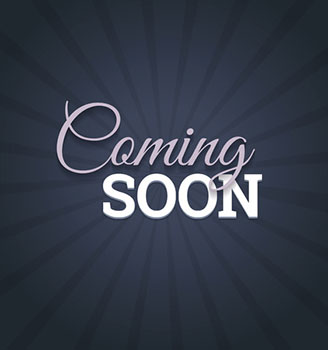 It’s Yuletide and Alf is looking forward to partying with her guests … but Whittlecombe has fallen eerily silent. Sleet descends as the residents sink into a deep and dreamless sleep.

All except for Alf. She recognises a horrible hex when she sees one. But who has cursed the village and why? And what will it take to undo it?

For more information about Jeannie’s forthcoming tales, or to receive notification of free material please sign up for the newsletter. We promise not to spam you and of course your details will never be passed on to anyone else.

You have Successfully Subscribed!