A strange – looking person turned up at the renowned Gosh Hospital in the scenic island of Gosh in the year 2036. He asked to see Dr. George Brown, Medical Chief of staff.

He claimed to be a zombie who reported to Master Zeeka and revealed information about a plot to attack the hospital.

Dr. Brown, suspicious of his motives, sedated him, left him in Room Nine, and called a meeting of the hospital doctors to discuss the recorded conversation between the zombie and himself.  The zombie had no name and Dr. Brown referred to him as Number Nine because he had left him in Room 9.

Zeeka outsmarted Dr. Brown and disappeared, causing the doctors with the exception of two, Dr. Raynor Sharpe and Dr. Mark Schmidt, to disbelieve what Dr. Brown told them. They even questioned whether Nine was really a zombie as he made no attempt to attack any humans in the hospital. The three doctors vowed to uncover the truth.

A few weeks later at the national Carnival celebrations a colourful sailor band with zombie-like persons launched a fatal attack on innocent spectators, confirming Number Nine’s revelations to Dr. Brown. It appeared that Number Nine died in that attack?  Fingers were pointed at one man for the brutal attacks, but was he the real perpetrator? One man knew Zeeka’s secrets and he revealed them in a flash drive..  Did the authorities believe him or did they falsely accuse him? 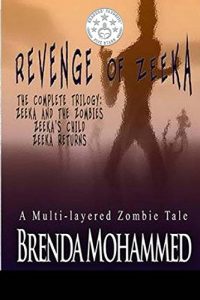 Revenge of Zeeka by Brenda Mohammed

In Revenge of Zeeka: Horror Trilogy by Brenda Mohammed, the island of Gosh is under attack by an army of zombies under the command of a vengeful science genius. In the year 2016, the Zika virus broke out in Central and South America with life threatening effects for pregnant women. Given a choice to save the mothers or the unborn babies, a decision was made to save the mothers.

The tiny stillborns were securely and secretly buried. Only a few people knew of this. Unknown to everyone, however, a certain scientist managed to get hold of all 51 bodies, bring them back to life, and condition them to follow his command, creating himself a perfect army of zombies.

Now, twenty years later, the evil scientist seeks revenge on those he holds responsible for the stillbirths. Only three of the current doctors at Central Hospital – Raynor, Mark and George – witnessed the unfortunate events of 2016. The three have strong suspicions about who might be controlling the zombies. Meanwhile, Zeeka is lying in wait for the perfect time to unleash his army onto the island. Zeeka has big, evil plans and this is just the beginning. In a desperate search for answers, and with very little to go on, the doctors search for the elusive Master Zeeka.

Will they save the islanders from Zeeka and his zombies, or will it be too late?

Praise for the trilogy

“Revenge of Zeeka, by Brenda Mohammed, is a one of a kind novella trilogy that delivers an incredible story guaranteed to give readers an absolute sci-fi treat. I especially liked how Brenda used current events as the pivotal point from which to build this amazing sci-fi horror.

This made the story even more relatable. More importantly, however, I admired how she owned her story and created this captivating version of events. She captured with amazing depth the setting, characters, plot, and emotions in such few words. If you are looking for a thrilling short read, this fast-paced, sci-fi action novella will give you the time of your life.”